Okay, I had to buy an iPhone one year ago or so, because I wanted a phone with more than 16go of space. Well, after around one year, here are a few thoughts. Enjoy.

The company we love to hate. I had 2 iPod Touch, the second one was a replacement of the first because of a jack

I was pretty happy for a few months, I didn't had to charge it during the day and still had 30% left ! It's not the case anymore. I have the freaking 30% battery bug: around 30-40% left, the phone shuts itself down. If I try to restart it, it asks me to plug it. I can try to restart it, and after 3 or 4 reboots, sometimes I can use it normally.

That is a pretty good point of the iPhone. Pictures are pretty cool !

Apple, the king of design.

When they switch to a flatter design and abandoned skeuomorphism, that was kind of a fail (even if a shitload of designers were fapping themselves because if you think different than Apple you are a moron).

Now, with the nice, light and clean interface for all app, it became acceptable. For example: 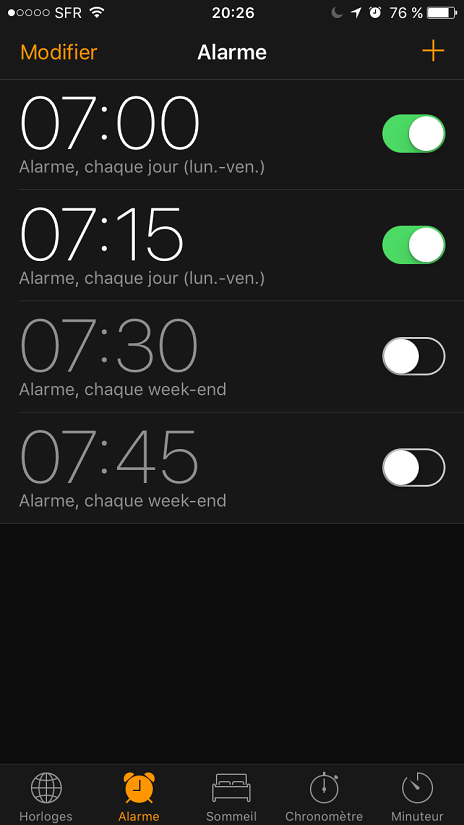 I thought that was a joke for halloween, but the Alarm app is still like that. Horrible and not practical.

Also, you can see that the «Modify» button is not a button but a label. Well, you know... Design... Fuck.

The App Store is really bad:

In fact: you won't find one on the iPhone. Seriously, Safari... And fucking web views for other browsers...

What I am currently feeling, writing this article.

I really think Apple needs to improve the photo albums a lot.

For example: when you want to download an album of 170 pictures, you expect a nice archive. That is what you'll get: 170 pictures in your download folder. :clap: :clap:cra

I had this issue with my previous iPod touch, and it is still here: the headphone plug sucks, and it is already becoming fragile on my phone.

I understand why they removed it on iPhone 7 !

Apple is often depicted as a company that makes products simple. The iPhone is not that simple.

The best example for me is the notifications.

The launcher and interface.

I really miss Android. The Apple launcher is really not for people who like to be organized ^^

We should be able to choose what to display. I don't care about AirPlay, AirDrop or Night Shift, but I listen to music a lot. I have no choice to move between the 2 panels.

I don't remember how it was on ios9, but they suck on ios10.

When Apple tries to open things, they like to keep is closed to prevent you from using other apps.

Well, apps. I miss the Unknown sources from Android soooo much !

Ok, settings, but I needed a word beginning with R ^^

I like the way the settings are organized and how the apps and notifications are listed. Very nice.

Trying to find a way to solve the 30% battery bug, I contacted the Apple Support on Twitter.

After allowing them to spy on my phone and giving them screenshots or my battery consumption, their piece of advice was:

Stay up to date

There is a replacement plan from selected serial numbers. I am not in their range.

Seriously. Well, fuck you then, I'll go back to a real phone next time.

It is basically cool only to swipe between your screens in the launcher. When I try to unlock my phone using a code (when the phone starts), I often have to try 2 times because the touch thing is not responsive enough to follow the 6 digits I input.

Also, sometimes you have to «touch» to many times. For example, the alarm screen. To change the time of an alarm, you have to touch the «modify» label

I have always thought that the proprietary Apple thingig to plug the iPhone was stupid. Not having to check the way when I plug it was actually a good surprise !

Finally, we are able to remove default apps !!

I know you are starting to be fucked up because the 7th went out and you want me to buy it. Never again.

I could not find the zoology track from their «Clones Live in Berlin», so here is another track:

Puppetmastaz - The Bigger The Better